Orchids Named for Christmas - Part One 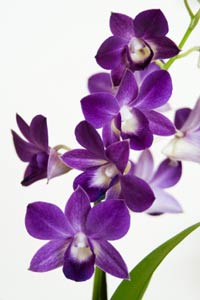 The bright red flowers of the "Christmas Bell" orchid headed the list. Dendrobium lawesii is nicknamed the "Christmas Bell" because it produces clusters of bright red to purple flowers that look just like bells and they appear around Christmas time, as well as several other times of the year. A warm to cool grower that originates from Papua New Guinea, they love to grow on tree branches high in the forests, and grow very well when mounted.

Next on the Christmas list is Artorima erubescens, known as the "Christmas Flower" because it too blooms around Christmas time and loves cold weather. This species is native to Central America and is also known as the "Blushing Artorima." This orchid grows in the cloud forests at high elevations around 3100 meters with fragrant flowers that appear in winter through early spring, but are quite difficult to grow in the average greenhouse because this orchid blooms when the night temperatures are below freezing!

Our next orchid is the "Christmas Lily," Calanthe triplicate, another winter bloomer. It blooms all during the Christmas season--beginning its flowery show in late November and continuing through the end of January. Once called Calanthe veritifolia, it grows in the shaded areas of the forest in the leaf mold and humus that collects under the trees. Although it appears to be growing in the soil like a normal plant, the roots do not penetrate the ground very far. It grows along the top of the surface just under the leaves and debris that cover the ground.

Next time: two Christmas Orchids and a Christmas Star to top it off!