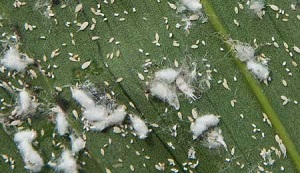 In our previous post, we discussed how several pests could take aim on your Phalaenopsis orchid, including Scale and Aphids. Below, we continue to cover other orchid pests that could cause harm to your beautiful plant.

Mealy bugs will hide in all areas on and around a Phalaenopsis orchid. You can find these tiny, long white creatures living in the potting media, on the plants, under the potting trays, or in any crevice that they can squeeze into. These pests are oval shaped insects that look to have legs, but in actuality only have filaments instead. These pests can be killed by spraying the entire Phalaenopsis orchid with rubbing alcohol. Because the insects also live in the potting media, the alcohol will need to be drizzled into the media and sprayed on the outside of the planter. Let stand for five minutes and then rinse all alcohol away with water. Mealy bugs on the orchid may need to be removed with a cotton swab dipped in alcohol. Neem oil and insecticidal soap is also an option for killing this invasive pest.

Is your plant suffering from a different orchid emergency? Check our Orchid 911 guide to find the answers to many common troubles.