What Kind of Soil Should I Plant My Orchid In? 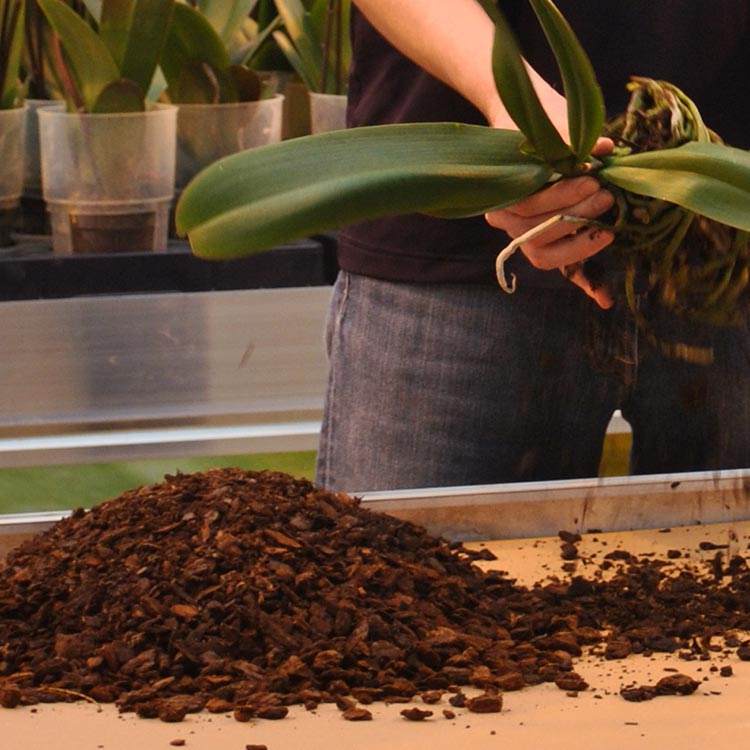 “What kind of soil should I plant my orchid in?”, is a frequently asked question. When repotting Phalaenopsis orchids, which is recommended every one to two years, orchid growers suggest using a good-quality, commercial potting mix formulated specifically for use with orchids. Used potting materials should never be reused to pot Phalaenopsis orchids; only fresh, new potting media should be used.

The reason for this is that orchid potting media is composed of large, loose, chunky, natural materials (such as orchid bark, sphagnum moss, tree fern and lava rock) that provide the fast drainage and air circulation essential to the growth and maintenance of healthy Phalaenopsis orchid roots. Over time, potting materials break down, becoming smaller and more compressed. Not only do smaller, more compact particles shut down essential air flow to the orchid’s roots, they retain more water, preventing proper drainage that can lead to root rot and fungal disease.

Commercial potting mixes are easy to use and provide an ideal growing environment for orchids. However, some orchid lovers like to mix their own potting media. Recipes are readily available on the Internet; just keep in mind that Phalaenopsis orchids obtain most of their necessary nutrients from fertilizer, not potting materials.

Potting materials for Phalaenopsis orchids should do four things:

The most commonly used orchid potting materials in the U.S. are orchid bark and sphagnum moss, although both are generally mixed with a number of other ingredients.

How to Repot an Orchid

After a generous watering, gently pull out orchid from its pot. Carefully loosen the roots, then remove the growing medium from the root ball. Trim any dead roots, which will be soggy or colored brown or black. Add the orchid into the pot and add potting mix, tapping the pot onto the table to distribute the soil evenly around the orchid roots. When the orchid feels firmly in place, arrange a layer of orchid mix over the top of the roots; water well.

If you do not know when it's time to repot, here are some instances:

Try a new recipe every time you repot an orchid until you find the perfect blend for your varieties. Be sure to check back next time to learn about commonly used orchid potting materials. In the meantime, check out this video to learn about water drainage for your orchid.

Plastic or Clay: Which Is Better for Potting Orchids?