Insects That Can Be Attacking Your Orchids, Part 2 of 2 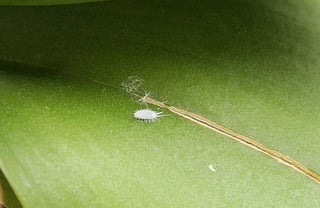 In our previous post, we discussed the serious toll scale insects can take on your orchid plants and introduced you to mealy bugs. Today, we take a more in depth look into mealy bugs and how you can detect them on your plant.

Mealy bugs can easily be identified in their adult form. The long tailed mealy bug is the easiest for most people to identify because of its long filaments on the backside of its body. Look for these pests to be varying in shades of white, pale pink or even blue in color. Orchid owners often find these pests on the underside of their Phalaenopsis orchid leaves, but they may also be hidden in other areas of the plant.

Mealy Bugs on the Move

Mealy bugs in different life stages will exit the existing plant and take refuge under the potted plant, travel to a neighboring plant, hide in cracks and crevices where the plant is located, under rims of pots, and under trays where the orchid is located. One of the worst problems with Mealy Bugs is that the nymphs are so tiny that they are extremely difficult to see and they usually require a magnifying glass to locate them. Because of their tiny size, the little crawlers are able to hide or crawl from plant to plant with ease, which in turn will easily spread the mealy bug infestation. Mealy bugs will also travel to other ornamental plant species that are located nearby.

It is important to begin treatment of mealy bugs as soon as they are discovered. Mealy bugs can be removed more easily once they reach adulthood because they can be seen, but the younger generations are the most problematic pests. In order to bring a mealy bug infestation under control, it is recommended that mealy bugs be treated every 10 to 14 days.

Insects That Can Be Attacking Your Orchids, Part 1 of 2