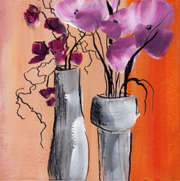 Orchids have come to represent the mysterious, so perhaps it should not be surprising that they are the stars in a series of murder mystery novels. The website for author Michelle Wan and her book series can be viewed at www.orchidsaremurder.com.

The first book is Deadly Slipper, written in 2005. In this tale, the fate of a missing woman is tied to the hunt for an astounding, unknown Slipper Orchid. Booklist said it was "a fragrant combination of orchid lore and suspense." (Slipper orchids are the ones with a pouch as the lip and include Paphiopedilum, Phragmipedium, Cypripedium, Mexipedium and Selenipedium orchids.)

In 2006, Wan released The Orchid Shroud. In this story, an embroidered representation of a mystery orchid reveals horrific things and causes people to wonder if a monster stalks the quiet forests of the Dordogne, France.

In A Twist of Orchids, published in 2008, orchids and drugs are linked to a murderous midnight apparition…with a rhyming burglar thrown in for fun.

Mysterious Reviews said, "With its sensuous language and evocative imagery Wan's story of its twist of orchids and twists of fate has action galore and sustenance aplenty to tickle the palates of even the most discriminating of...mystery lovers."

The latest in the series, Kill for an Orchid, is to be released in January of 2010. For real orchids that bring mystery to your life and maybe even a spine-tingle or two, just add ice!