How Do Orchids Grow? 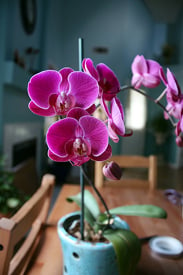 Just as some orchids are terrestrial (ground dwellers) and some are epiphytes (tree dwellers), different types of orchids exhibit different growth patterns. There are two primary ways that orchids grow: monopodial or sympodial.

Monopodial (meaning single foot) orchids, like Just Add Ice Orchids and Vanda orchids, produce a single, well-defined main stem that exhibits predominantly upward growth. The roots of monopodial orchids grow in a tangled mass under the surface of the orchid’s growing medium but will also loop above the surface. Leaves are produced at the tip of the stem as it grows upward. Leaves may grow in a mass at the bottom of the orchid stem as they do in Phalaenopsis orchids or be produced along the stem, lining the stem in a fan-like pattern as it grows upward. Flower spikes grow from the junctures between the leaves and the stem. As orchid plants bud and bloom, the weight of their blossoms causes the top end of the flower spike to bend, producing the lovely graceful arch associated with Phalaenopsis and some other monopodial orchids.

Sympodial (meaning many footed) orchids, such as Cattleya orchids and Paphiopedilum orchids, have a spreading, predominantly horizontal growth pattern. Sympodial orchids produce multiple thick, bulbous “stems” called rhizomes that grow horizontally along the surface of the ground or potting mixture. The upper surface of a rhizome is usually visible, protruding slightly above the soil surface. New shoots grow upward from the rhizomes, each rhizome producing at least one and often several shoots. Each shoot produces its own roots which typically grow along the surface and may cascade over the side of the orchid pot. Flower spikes can develop either between the leaves at the top of the orchid’s growth or from the base of the plant.

Tell Us Your Favorite Recess Activity for a Chance to Win an Orchid!