How to Decipher the Story Orchid Leaves Tell 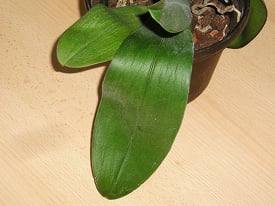 The shape, size, veining and character of its leaves tell a story about an orchid plant. If you know how to decipher the clues, the leaves of an orchid plant can reveal quite a bit of information about its species, growing habit, native climate and the health of the plant. Orchids are monocots, one of the two groups into which botanists divide flowering plants. Monocots have a single cotyledon (Greek for seed leaf) present in their seeds; as opposed to dicots, which have two cotyledons in each seed. In monocots, the cotyledon is part of the plant’s embryonic structure. As with many monocots, the first “leaf” produced by a Phalaenopsis orchid rises stem-like before unfurling into one or two thick, fleshy, elliptical leaves at the top of the existing leaf mass.

Monocots, with their more simplistic structure, date farther back in the geological record than dicots. The earliest fossil record of a monocot dates to the Early Cretaceous period about 120 million years ago. Orchids are the largest family of monocot plants, comprising just more than a third of all monocot species. Like other monocots, the leaves of Just Add Ice Orchids have parallel veins. Monocots also have soft, not woody, stems and fibrous roots. Dicots have hard stems and tap roots and their leaves exhibit a network of veins.