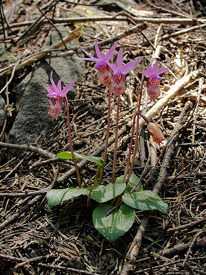 Scientists have known for some time that a critical relationship exists between orchids and fungi but have been stumped about the precise nature of that relationship. In nature, microscopic fungi provide the vital nutrients that young orchids need for healthy growth. In fact, in their native habitats, orchid seedlings feed exclusively on minute fungi found in local soils. When fungi are absent, orchid seeds often fail to germinate and orchid seedlings do not develop into mature orchid plants.

Smithsonian ecologists discovered that forest age and fungi quantity are the two critical factors that promote healthy orchid germination and growth. The results of the 4-year study were published in the January 25, 2012, edition of the journal Molecular Ecology. The study’s most important discovery is that the quantity of fungi present is the key factor in orchid survival. Fungi presence alone does not promote orchid germination; fungi must be present in significant quantity for orchid development to occur. Scientists also found that fungi prefer old-growth forests to new forests, most likely because of the important role they play in decomposition. Scientists say the next step is to see where new forests can be seeded with enough fungi to promote orchid growth and protect endangered orchid species.