"What Kind of Orchid Do I Have?" Find out! 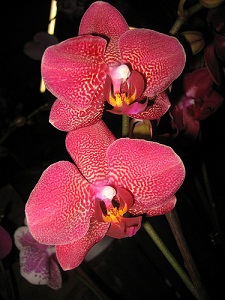 "What kind of orchid do I have?” is one of the most frequent questions we receive on our Just Add Ice Orchids forums.  All Just Add Ice Orchids are members of the Orchidaceae family and are different varieties of Phalaenopsis hybrids. Because of the vast number of different Phalaenopsis varieties, individual varieties are numbered by growers, not named. But orchid owners will not find the grower identification number of their specific orchid on the plant’s tag, as it only has value for orchid growers.

When talking about Just Add Ice Orchid varieties, color and markings are typically used to differentiate varieties. Just Add Ice Orchids are available in more than 60 colors and are divided into seven categories: pink, salmon, white, purple, yellow, bicolor and unique. “Unique” refers to orchids with unusual markings on the petals. (Click the link to watch our greenhouse video showing examples of each identification category.)

Orchids Around the World

More than 25,000 distinct species of orchids in 880 genera have been identified, making the orchid family one of the largest families of flowering plants. Orchids can be found on every continent except Antarctica and comprise approximately 10% of all seed plants. Twice as many orchid species as bird species inhabit the earth, and orchid species are 4 times more numerous than mammal species. As if nature didn’t provide enough variety, orchid breeders have created more than 100,000 orchid hybrids.

The genus “Phalaenopsis” was named by C.L. Blume in 1825. In Greek, the name means “looks like a moth,” giving rise to the plant’s common name, “moth orchid.” The orchid’s large, curved petals do indeed look like a moth with its wings spread. More than 50 species of Phalaenopsis have been identified; Phalaenopsis amabilis being one of the most popular and America’s favorite orchid.