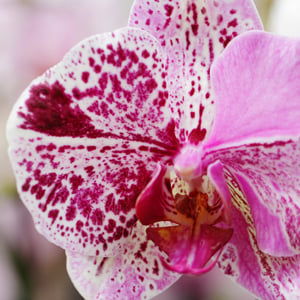 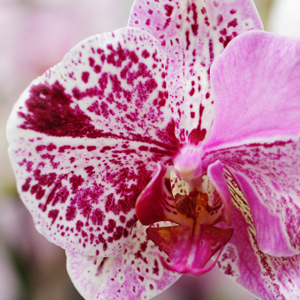 Phalaenopsis orchids are truly one of the most interesting flowers there are. Not only do orchids have a compelling history, but there are at least 60 different species of Phals alone. Let’s take a look at some of these unique Phal species:

Phalaenopsis coringiana originated on the Southeast Asian island of Borneo. What makes this Phal so unique is the distinct geometric pattern adorning its petals. It’s an orchid for the creative type in that it looks like a product of modern art. You’ll find some that are densely pigmented, and some less so. It’s often mistaken for the Phalaenopsis sumatrana, for their similar fushia-esque coloring. How to tell the difference? Their scent. Phal corningiana smells of delicious candy, while the scent of Phal sumatrana is of a more pungent variety.

This exotic three-toned orchid is native to Malaysia, one of three countries on the island of Borneo. Phalaenopsis Bellina’s flowers are greenish-white, and its petals are imbued with purple. Its feminine flair makes it a desirable orchid to use in décor projects. The Phal bellina is commonly confused with Phal violacea because both are infused with a rich purple hue. The difference, you say? The Phal bellina’s purple pigment is found on the base of its petals, while the purple pigment in Phal violacea completely envelops its petals. This gives the Phal bellina the unique look of having been gently dipped in purple dye in its center, making it the perfect Phal species for the funky creative type.And if you happen to be a fan of Fruit Loops, you’re in luck. The scent of Phal Bellina has been compared to the fruity cereal.

Phalaenopsis doweryensis, named for the Dowery Orchid Nursery in Virginia where it was ID’ed over a decade ago, should be nicknamed “spotted orchid” for the signature reddish-purple spots that dot its surface. It’s native to Sabah, one of Malaysia’s thirteen states. Not to be confused with its cousin, Phalaenopsis gigantea, Phalaenopsis doweryensis’ spots look as if they’ve been lightly sprinkled on its petals. Its special spotted feature would make it a lovely addition to any household!

Do you have a favorite orchid species not included here? We’d love to hear about it in the comments section below!