Our plant care team is dedicated to uncovering and providing credible information founded on research. As such, we’ve decided to start breaking down common home remedies to discover if they are safe and effective for use. We started with a common remedy recognized as a “cure-all” for root rot—hydrogen peroxide.

What is a home remedy? According to Merriam-Webster (2021), a home remedy is “a medicine made with ingredients accessible at home.” Usually, home remedies also come with the connotation that they are unproven, but they are still widely used because of claims of effectiveness, and of course, their convenience.

Not only are they convenient, but home remedies are often portrayed as more affordable and safer to use than products at your local garden center that are labeled for plant care. However, there is a downside. Most home remedies haven’t been tested and observed by scientists to determine their safety or effectiveness. When it comes down to it using a home remedy means you are relying on unreliable internet resources or first-hand experience.

So, how do you know if your remedy of choice is safe and effective to care for your plant?

Renata Goossen, plant care specialist at Just Add Ice, completed her undergraduate research at Kansas State University before joining our team. Because there was no research on the use of hydrogen peroxide to treat orchid roots, Renata decided to center her final research project on studying the safety of using hydrogen peroxide in orchid roots. Check it out! The study is called “Characterizing the Phytotoxic Effects of Hydrogen Peroxide Root Dips on Phalaenopsis Orchids.”

She set up a controlled environment to mimic the typical growing conditions inside a home. She designed the experiment to include four hydrogen peroxide concentrations with four repetitions each, for a total of 16 orchids. Then, she dipped each orchid root system into its respective concentration for 3 minutes one time (e.g., 4 orchids were dipped into water, 4 were dipped into 3% hydrogen peroxide, etc.). 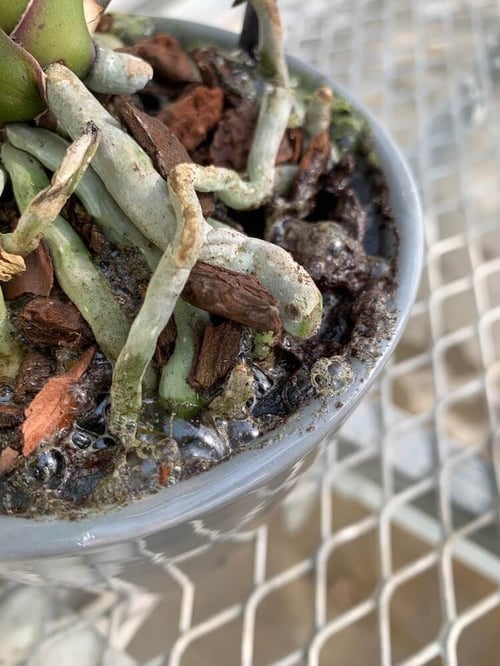 During the 27-day experiment, she observed and recorded data. Then, she compiled results to determine if hydrogen peroxide should be considered safe for use in orchid roots, and if so, at what rate it could potentially be used.

Rather than controlling or setting back harmful plant diseases, hydrogen peroxide has the potential to harm roots and cause plant decline.

Instead of finding a method to treat the roots, consider changing your plant’s growing conditions. While both can be caused by warm and wet conditions, root rot and root decay are two separate problems.

The tell-tale signs of root health issues in orchids are dreaded by orchid lovers everywhere. Dark, slimy roots that fall apart to the touch are never a good sign for your plant. While symptoms that appear out of nowhere may seem to have a cause related to disease, in most cases root decay is caused by growing conditions rather than disease.

The two main diseases that cause technical “root rot” are called Pythium and Phytophthora. Both are serious pests in the plant world and can be readily tested for by plant pathology labs accessible to the public at land grant universities. If you are concerned that you may have a plant disease, quarantine the plant, and test it before treating. For assistance or questions about testing, contact your local horticulture extension agent.

However, as mentioned before, most cases of root decay are not caused by a disease but by growing conditions. To remedy root decay issues, simply alter your watering routine, repot into rooting media that has better drainage, or move the plant to an area with better air circulation and lighting. You may want to trim away decayed roots that are dark in color and mushy. Keep in mind that you cannot reverse root decay — you can only change the growing conditions of your orchid to encourage better growth.

If you question the safety or effectiveness of a home remedy, contact our plant care team at plantcareteam@justaddice.com. If we can’t advise you based on reliable research, chances are that we’ll give it a test ourselves and let you know!