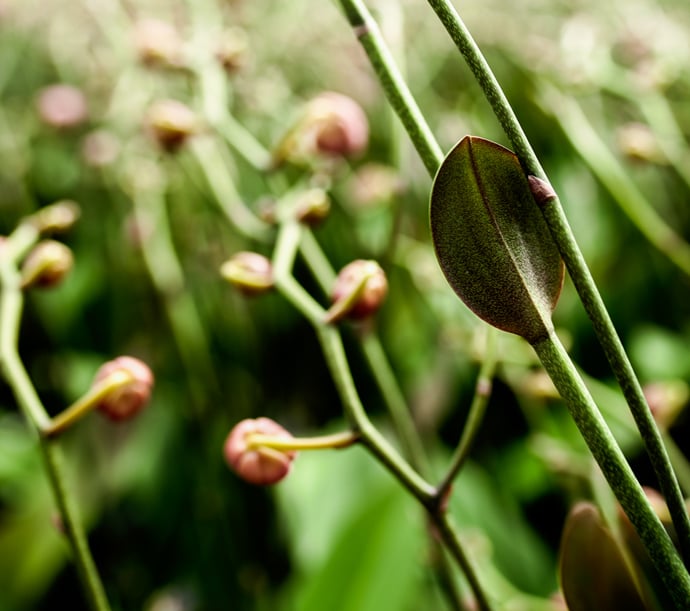 If your Phalaenopsis orchid starts sprouting leaves instead of a flower at the end of its spike, congratulations! Your orchid is about to become a new parent! These leafy growths are called “keikis,” the Hawaiian word for “baby,” and are actually baby orchids that can be cut from the stalk and planted to create new plants. Because the generation of keikis is a form of asexual reproduction, you can expect the “baby” to look like its parent.

Keikis are not rare, but they are unusual and their formation is sporadic. Your orchid may never form a keiki or it may be blessed with several “children” during its lifespan. In Phalaenopsis orchids, keikis generally form at a node near the end of an orchid spike, but they sometimes emerge from between or under the leaves at the base of the plant.

Keikis that form at the base of a Phalaenopsis orchid are called Basal Keikis. Because they are often more difficult to remove, leaving a large wound, snipping them can endanger the mother plant. In contrast to a keiki that forms on a flowering stem, Basal Keikis often don't have an easy snipping point.
But don't worry. You can leave Basal Keikis on the mother plant with no issues. Some orchid growers even hope for a Basal Keiki because it creates a fuller-looking plant with more flowering stems and more total blooms in the future!


Caring for the Keiki

Keikis will eventually sprout additional leaves and aerial roots. When it has at least 2 to 3 roots that reach a length of 3 to 4 inches, the keiki can be cut from the parent stalk and planted in its own pot. Use a sterile knife to make the cut, including a 1- to 2-inch piece of stem with the plantlet. As a precaution, you may want to swab the cut ends of both the keiki and mother plant with a fungicide.

Now it's time to repot these orchid babies in their new nursery or fresh orchid medium! You can follow our orchid repotting instructions, but with a few additions as these instructions are for a fully grown plant.

Pro Tip: Only add fertilizer to the keiki after it is well established on its own, which will be at least several months after transplanting it.

All of this may sound complicated, but orchids (and even their babies) are generally easy to care for as long as you know the basics. To learn more about orchid care, download our free care guides such as the one below, and be sure to read our latest blog posts! 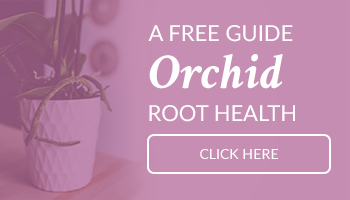