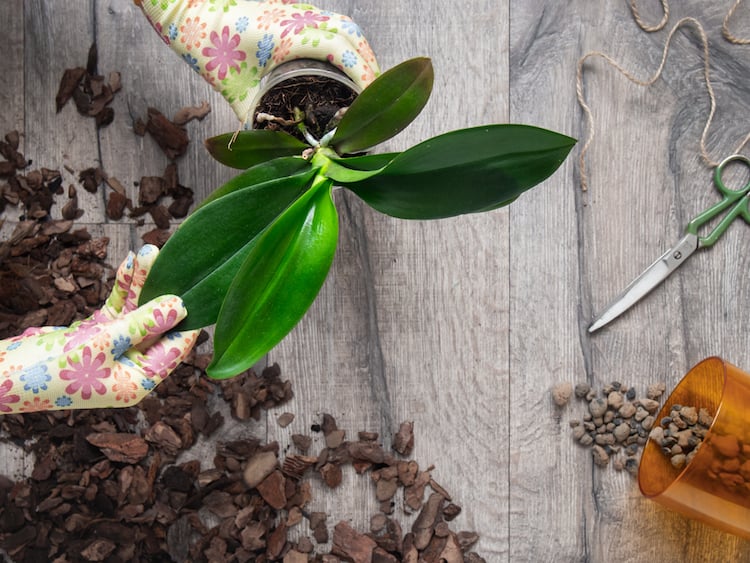 You should repot your orchid every one to two years to keep it healthy and help it grow. Repotting also keeps the potting media in good shape, allowing for the rapid drainage and root aeration that Phalaenopsis orchids require.

If you've never repotted your orchid before, you might be wondering if it's really necessary. You might also be hesitant to repot your orchid because you don't want to damage it. Luckily, orchid repotting is super simple! Here are three telltale signs it's time to repot and what you need to do next.

Why Repot Your Orchid?

Orchids are typically potted in loose, coarse fir bark mixed with other organic materials such as sphagnum peat and moss.

Over time, organic materials break down. As particles become small, finer and more tightly packed, the growing medium is unable to supply the orchid with sufficient nutrition. Air is no longer able to circulate around the orchid’s roots properly. Worst of all, fine, silty soils retain more water; enveloping orchid roots in perpetual moisture, which can quickly lead to root rot and/or the development of fungal disease.

As a general rule of thumb, Phalaenopsis orchids should be repotted every one to two years, but there are times when you might need to repot your orchid sooner.

Inspect your orchid plant periodically. Look carefully at the texture of the potting medium. If it appears to be breaking down or compacting, it’s time to repot. To check for excess moisture accumulation, remove the clear plastic grower pot from the decorative pot and inspect the plant’s roots. Healthy Phalaenopsis orchid roots should be a healthy green color. If roots look brown or soft, they are drowning in too much water. Roots that have turned a grayish-white are not receiving enough water.

3 Signs It's Time To Repot Your Orchid

Most experts recommend repotting orchids every one to two years, and that can be a great rule of thumb to follow. However, there are a few other reasons that may come up in the meantime that require repotting earlier or more frequently. Here are three common reasons.

1. Your Orchid Has Outgrown Its Pot

Once you notice your orchid’s roots seem too crowded in its current container, it’s time to repot your orchid. If you see roots beginning to grow up from the plant stem or start to crawl over the side of the pot, it’s a telltale sign your pot has become too small.

2. When The Potting Media Goes Bad

Your orchid gets nutrients from its potting media, but eventually, enough nutrients will be leached from the media and it will being to break down into compost. While repotting every one to two years should prevent this issue, your potting media may begin to decay sooner, especially if your current pot isn’t properly draining. If you begin to notice a bad odor, it’s definitely time to repot.

3. Your Orchid Roots Are Tightly Tangled

New Phalaenopsis orchid owners often mistake the plants natural, tangled growing pattern as a sign that their orchid is pot-bound and in need of repotting. As long as roots are loosely twisting and overlapping – the normal growth pattern for moth orchids – you can wait to repot. Tightly tangled roots indicate that your orchid needs repotting. Repotting your orchid will provide it with the nutrients it needs to flourish and bloom.

What Else Do I Need to Know About Repotting Orchids?

Wait until your orchid has finished blooming and all the flowers have fallen off before attempting to repot it. If there are no pressing reasons to repot your orchid, wait until a blooming cycle is complete.

When it's time to repot, be careful when removing your plant from its current container. You’ll need a new pot that is around an inch or two larger than the pot your orchid has just outgrown — and make sure it has drainage holes. Ideally, all of the roots of your plant will fit into the new pot with about half an inch of space around the sides of the pot, which you can then fill in with potting media.

It contains everything you need to repot your orchid, including a new pot, potting media and step-by-step instructions.