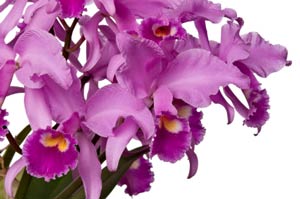 According to The Orchid Lady, there are two extraordinary orchid species of Cattleya nicknamed "Christmas Orchid." They get their nickname from the fact that they display their beautiful orchid blooms around Christmas time.

The first Cattleya "Christmas Orchid" is Cattleya percivaliana. Although this is a relatively small plant, the flowers are quite large in relation to its size, with lavender to rose-colored blossoms. Each bloom is further decorated with a frilly lip and a touch of yellow in the throat. Though Cattleyas are known for their beautiful fragrance, this one has just the opposite—a rather putrid odor. So if you're considering giving orchids as gifts, maybe this one isn't the best choice.

The other Cattleya "Christmas Orchid" is Cattleya traianaei. It is one of the most cultivated Cattleya species in the orchid community and is now the national flower of Colombia. This species produces blossoms in many colors from a pure snowy, holiday white to deep lavenders and anything in between. It begins to bloom around December, but continues its show for the next four or five months, right into the Easter season. And it smells good too!

Finally, the orchid known as the "Christmas Star" or "The Star of Bethlehem Orchid" is Angraecum sesquipedale. The star-shaped blossoms are a waxy white to greenish white in color, appropriate for the holiday season. This orchid is only fragrant at night, keeping with it's night-time star-like qualities.

Though these orchids are named for Christmas, there are many more that are just as appropriate for gift giving and holiday decorating, like our own Phalaenopsis Orchids!

Orchids Named for Christmas - Part One