How to Repot Your Just Add Ice Orchid 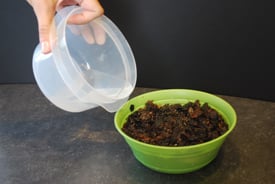 As mentioned in our previous post, your Just Add Ice Orchid will need to be repotted periodically to provide additional room for new growth and to renew its potting medium. It generally takes about 2 years for potting materials to break down and decompose. If your orchid is not repotted when decomposition sets in, the potting medium can become over-saturated, exposing your orchid to the threat of deadly root rot. When orchid-potting mediums break down, they lose their ability to carry nutrients to the plant and must be replaced to ensure the continued healthy growth of your Just Add Ice Orchid. Orchids should also be repotted if they develop an odor which can be a sign of either root rot of bacterial disease.

Repotting a Phalaenopsis orchid is not a difficult task, but care must be taken to protect the plant from damage during handling.

To repot your Just Add Ice Orchid, follow these steps: