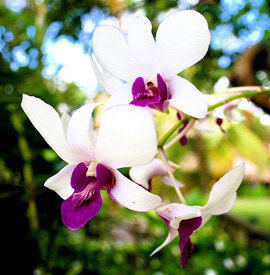 In the U.S., we’re used to looking down at the ground when we look for flowers. In our part of the world, even flowering shrubs and vines that shoot upward are rooted firmly in the ground. To survive in our temperate and cooler climate, plants need the protective insulation of the soil to protect their roots.

Not surprisingly, the majority of the orchid species that are native to the U.S. are terrestrial orchids, orchids that grow on the ground. There are a few exceptions, primarily in the more tropical climate of southern Florida’s swamplands where a few orchid species grow in the trees. One of the most intriguing of America’s epiphyte orchids is known as the ghost orchid. Believed to have developed from a distantly-related African orchid from seeds borne by the wind across the Atlantic Ocean, the American Ghost Orchid (Dendrophylax lindenii) makes its home in the Everglades where it attaches itself to the trunks and branches of pond apple and pop ash trees. In the dim light of the murky swamp, the ethereal white blooms of the Ghost Orchid appear to hover ghost-like in mid air.

Tree-growing epiphyte orchids are more common in the tropical environment of equatorial rain forests. The term Epiphyte is actually used to describe any orchid that has roots that grow above rather than into the ground. Phalaenopsis, Dendrobiums and Bulbophyllums are among the most beautiful and most prized epiphyte orchids.

Their stunning beauty, long-lasting blooms and easy care have made Phalaenopsis orchids the most popular orchid in America.

Orchid buyers should not be confused by the fact that Just Add Ice Phalaenopsis orchids are sold in pots. The orchid is planted, not in dirt, but in a special orchid potting mix that mimics the soft tree bark to which the plants adhere in the wild. Phalaenopsis’ epiphyte heritage is evident in the appearance of looping green roots that push into the air.