How Did 'Moth' Orchids Get Their Name? 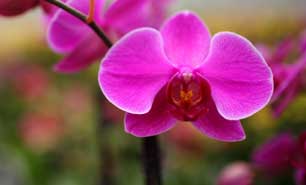 Phalaenopsis amabilis orchids were first described as a species in 1753 by Swedish botanist and zoologist Carl Linnaeus, the “Father of Modern Taxonomy.” Referencing their native tree-dwelling habitat and pleasing appearance, Linnaeus called them Epidendrum amabile. During a mid-1750s voyage to China, Swedish naturalist Peter Osbeck, a Linnaeus apostle, is said to have inadvertently given Phalaenopsis orchids their common name, “moth orchid,” when he peered through his field glasses during a stop in Java and mistook a large cluster of Phalaenopsis orchids for a flurry of moths. It would be another 75 years before German-Dutch naturalist Carl Blume would give these stunning butterfly-shaped flowers their modern species name, Phalaenopsis amabilis; but they are still fondly called “moth orchids” by their many devoted fans.

A Long Road to the Top

It wasn’t always that way. When orchid growing became popular in Victorian England, moth orchids were rarely grown. Lacking pseudobulbs, Phalaenopsis orchids were more difficult to transport than other species and often perished on the long voyages from their South Pacific homes to European greenhouses. Modern transportation and the development of easy-care hybrids have solved that problem. Today, Phalaenopsis orchids can be enjoyed by anyone!

America’s most popular orchid, Phalaenopsis orchids account for 75% of all U.S. orchid sales. Prized by both novice and experienced orchid growers for their easy care and beautiful, long-lasting blooms, an estimated 13.5 million Phalaenopsis orchids were sold in the U.S. in 2005. The development of a wide color range and specialty hybrids (bi-colors, candy stripes, harlequins, dots and other uniques) continue to increase demand for these magnificent flowers.

Learn more about Phalaenopsis orchids and how to care for them on our website.

Orchid Pests: Spider Mites and How to Remove Them