Repotting Advice For Your Phalaenopsis Orchid 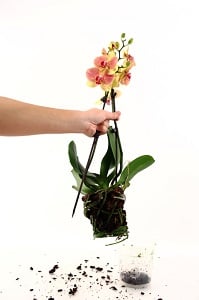 Many people who are new to owning Phalaenopsis orchids are often curious about the tight quarters that each Phalaenopsis orchid arrives in. It does not seem to matter if the pot is plastic or clay, the orchid appears to be squished inside just begging to be set free into a larger pot.

Phalaenopsis orchids are not like most other types of houseplants that you may have in your home. Orchids thrive when living in tight quarters. Many orchid experts say that if you repot a Phalaenopsis orchid in a pot that is too large, the growing energy of the plant will be focused on the roots and the leaves, instead of on the blooms. Orchids that are planted in too large of a pot will often fail to bloom until they have grown into their new living quarters.

When should you repot your orchid?

It is considered best to repot orchids when they are in active growth, directly after they bloom. The belief is that repotting orchids when they are actively growing will give them the best possible chance of settling in and growing nicely in their new environment. Don’t be surprised if the newly repotted Phalaenopsis orchid appears to be a little droopy at first. It won’t take long for the orchid to bounce back and look beautiful once again.

If you take the time to learn how and when to repot your beautiful Phalaenopsis orchids, you will surely be rewarded with years of wonderful blooms.

For more information about repotting Phalaenopsis orchids we encourage you to read more on our website.