So it’s Time to Repot your Phalaenopsis Orchid, Now What? Part 2 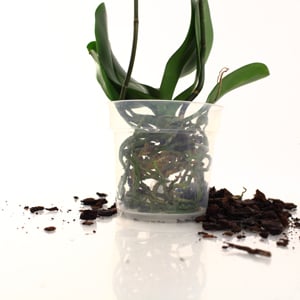 So, you’ve mastered the first two steps of how to repot your Phalaenopsis orchid in Part 1 of this two-parter. You’ve done good work so give yourself a pat on the back! So far, you’ve learned: a. to trim up your orchid’s spikes before repotting and b. to take your Phal out of its clear grower pot and trim away any unhealthy roots. Now it’s time to learn those final 2 steps to take when repotting your Phalaenopsis orchid:

Step 3: Place your orchid in a brand new container.

Has your orchid’s roots outgrown its old growing pot? If that’s the case, you should choose a new pot for your orchid that’s one inch larger in diameter than the old one. If you’re simply repotting to swap the old potting media for fresh new media, it’s okay to choose a new pot for your orchid that’s the exact same size as the old one. Make sure that whichever new pot you choose, it has plenty of drainage holes for excess water to escape. When placing your orchid in its new container, make sure the base of its lowest leaf is about one half inch below the container’s rim.

Once your Phal has gotten cozy in its new container, it’s time to add fresh potting media. There are a variety of potting media choices including sphagnum moss, fir bark, coconut husk and tree fern fibers. It’s also just fine to use a mixture of two or three of these. After you’ve selected a potting medium for your orchid, carefully place the chosen media around the whole plant. Now, gently press down on the new media while tapping the pot so that it settles in its new growing container. When all is said and done, the new media should fill the pot just short of the bottom of your orchid’s lowest leaf. Misting the leaves for the first week will help encourage root growth in the new media.

Whew! Now that you’ve got all that, you’re all set to begin repotting your Phalaenopsis orchid. We’re here to help along the way with any additional questions you might have about the repotting process.

Still curious about repotting? Check out this related blog post!

So it’s Time to Repot your Phalaenopsis Orchid, Now What? Part 1