Orchids and Pets Can Cohabitate 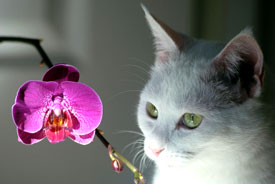 Owning cats, who like to eat houseplants, inspired Taylor Miller at the Herb Companion blog to share some tips for having both cats and orchids in the same environment:

“The quick fix for my cats has always been to mist the houseplant leaves and sprinkle with either cinnamon or cayenne pepper…but there’s good news – orchids are classified safe by The American Society for the Prevention of Cruelty to Animals (ASPCA).”

Orchids are edible, and in many cultures used in a variety of food preparation – the vanilla bean is a good example.

Miller explains, “The root-like parts of an orchid, called tubers, are composed of a starchy substance called Bassorin, a type of gum that is one of the primary ingredients of the old-world hot drink, saloop - or salep - the olden-days version of Starbucks coffee.” Miller added with interest, “Because the starchy substance is so highly nutritious it is still used in some herbal folk remedies.”

Having beautiful orchids placed throughout your home will also brighten the mood. Miller concludes that while orchid plants are considered safe, they are not necessarily good for cats to digest. He now has over a dozen orchids and the cats have not touched them.